Leidos oversees the testing of FUSRAP sites in St. Louis for the Army Corps. But its main gig is spying for the U.S. intelligence agencies, with zillions in contracts from the DOD, CIA, NSA and Homeland Security. 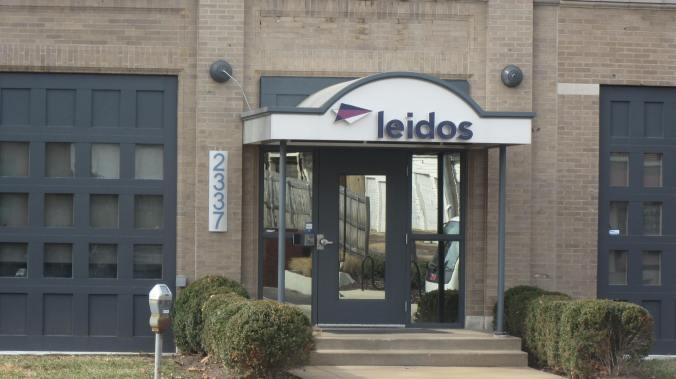 Ain’t nobody’s business but their own: Leidos hall of mirrors on South Grand in St. Louis. 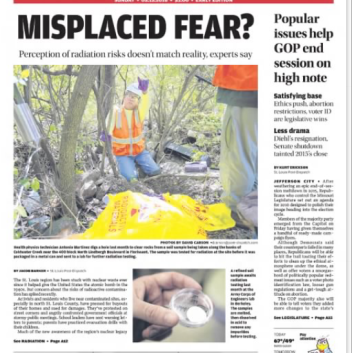 The FUSRAP worker testing soil near Coldwater Creek in Florissant is employed by Leidos, a defense contractor that receives billions of dollars in federal contracts from intelligence agencies.

It took months to prepare the story.  Sources were selected carefully from pro-nuke   “experts.”  There were fancy graphics and a sidebar, which helped fill an additional two  pages inside. The digital version included a link to a sarcastic video that degraded those who took the issue seriously. The gist of the propaganda piece was that there is nothing to worry about. Its banner headline above the fold screamed, “Misplaced Fear?”

The rhetorical question was followed by a photograph of a worker in an orange safety vest and hardhat kneeling along the banks of Coldwater Creek.  The  cutline identifies him as health physics technician Antonio Martinez, but it doesn’t identify his employer.  To figure out who employs Martinez it’s necessary to zoom in and take a closer look at the picture. Martinez’s hardhat is inscribed cryptically with one word: “Leidos.” The name was taken from the middle of “kaleidoscope,” and according to a press release it “reflects the company’s effort to unite solutions from different angles.”  What those angles are is not exactly clear, however.

Judging by his attire and location, Martinez presumably works for the company’s environmental engineering division, which has a contract with the U.S. Army Corps of Engineers, the agency that oversees the clean up of FUSRAP sites in St. Louis.

But Leidos has a darker side and lots of gray areas, too. Because there is so little light shone on the company’s clandestine activities, there is no way of knowing exactly what the shadowy firm does. A vast amount of its government contract work is classified top secret.  This much is known: 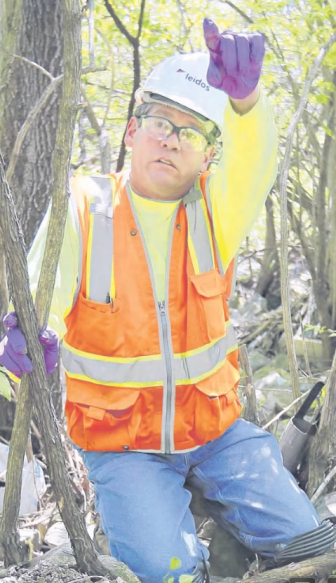 Leidos was created in 2013 when Science Applications International Corp. spun off a large portion of its classified government work. Both SAIC and Leidos have received  multi-million-dollar contracts to do clean up work  for the  U.S. Army Corps of Engineers Formerly Utilized Site Remediation Program (FUSRAP) in St. Louis, including the continuing cleanup of Coldwater Creek in North St. Louis County.

Leidos’ St. Louis offices are located on South Grand Boulevard in a renovated automobile repair garage. The building’s newly installed mirrored windows reflect the secretive nature of its government business, which is estimated to be valued at $60 billion. The company employs 80 percent of the private-sector work force engaged in contract work for U.S. spy and surveillance agencies, including the Department of Defense,  Homeland Security, CIA and NSA.

Leidos also has a contract worth more than $300,000  with the Missouri Department of Natural Resources through its  federal facilities management division. So the company is performing work for both the state and federal government with little or no public oversight.

Instead of “Misplaced Fears?,”perhaps a more appropriate headline for the Post-Dispatch’s hit job should have been “Misled and Smeared.”

2 thoughts on “Every Picture Tells a Story”