Government radiation test results of  Coldwater Creek are missing and presumed destroyed, says the chief of the St. Louis County Health Department. Meanwhile, independent testing has forced regulators to take a second look at a contaminated site they failed to cleanup next to Coldwater Creek in the past.

Records compiled as a part of a multi-agency investigation of  potential radioactive contamination of Coldwater Creek during the 1980s  are presumed to have been destroyed  as a part of an “archival cleanup,” says Faisal Khan, the Director of the St. Louis County Department of Public Health.

The revelation came in response to a Missouri Sunshine Law request filed in October 2016.  In his reply, Khan wrote: “Having searched our archives, we have not found any records are documents pertaining to any Cold Water [sic] Creek testing involving the then St. Louis County Department of Health. Any records are likely to have been destroyed in the course of scheduled archival cleanup.”

The testing is mentioned in a 1986 letter from then-St. Louis City Health Commissioner William B. Hope to St. Louis Alderwoman Mary Ross (D-5th Ward). In his letter, the city health official sought to alleviate the elected official’s concerns. Hope stated that periodic testing of the city’s water supply failed to find any “significant detectable levels of radioactive elements.”  The letter does not explain what amounts of radiation would be considered “significant.”

The letter makes clear the testing was conducted secretly over an extended period of time. “For years, I have quietly had the intake water supply monitored at various intervals for any evidence of  radioactive contamination,” wrote Hope.  He added that he would continue to have the city’s water supply monitored for the “indefinite future.”

The city health commissioner attempted to further mollify the alderwoman by informing her that the city was conducting a joint monitoring program of Coldwater Creek with the St. Louis County Health Department.

“In addition, there is an ongoing monitoring of Coldwater  Creek seepage being jointly conducted by the St. Louis County Health Department and the City’s Health Division,” wrote Hope.

Word that the county’s records have disappeared follows in the wake of an independent laboratory analysis last year that indicates radioactive contaminants may possibly still be seeping into Coldwater Creek near the Hazelwood Interim Storage Site (HISS) in Hazelwood.

The EPA was informed by email of the independent findings in Feburary 2016. 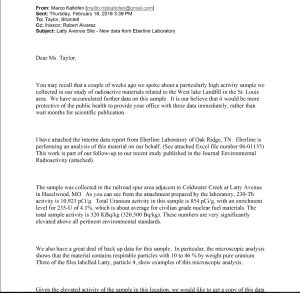 In the message, nuclear engineer Marco Kaltofen alerts the EPA — which has authority over Superfund sites —  to the location and exact levels of contamination, which far exceed the agency’s permissible amounts.

“The sample was collected in the rail spur area adjacent to Coldwater Creek at Latty Avenue in Hazelwood, Mo,” Kaltofen wrote. “As you can see from the attachment prepared by the laboratory, 230-Th [thorium] activity is 10,923 pCi/g. Total Uranium activity in this sample is 854 pCi/g, with an enrichment level for 235-U [uranium] of 4.1 %, which is about average for civilian grade nuclear fuel materials.  The total sample activity is 320 KBq/kg (320,500 Bq/kg). These numbers are very significantly elevated above all pertinent environmental standards.”

The email was also sent to officials at the Missouri Department of Natural Resources and the U.S. Army Corps of Engineers.

Kaltofen is a member of a trio of experts that published a scientific paper in late 2015 on radioactive contamination in St. Louis County that is leftover from the Manhattan Project and Cold War eras. The other two authors of the report are Robert Alvarez and Lucas Hixson. Their research was funded by environmentalist Kay Drey and appeared in the Journal of Environmental Radioactivity.

The sampling results submitted to the EPA by Kaltofen is part of a continuing independent investigation of St. Louis area contamination by the group.

The site in question, known as VP-40A,  had previously been tested by The U.S. Army Corps of Engineers and is mentioned in its 2005 Record of Decision. The contamination is located on railroad property that was deemed by the Corps to be “inaccessible,” and therefore exempted from the cleanup —  which has been shutdown and declared completed.

In late October, the Missouri Department of Natural Resources, which shares responsibility with the Corps, retested the location and said that the levels of contamination at the site match the historic record established by the Corps’ earlier testing.

The details of the testing have been been requested from MDNR by The First Secret City, and the Corps has also been asked why the site was exempted from the original cleanup of the area, which is referred to as the Hazelwood Interim Storage Site.