When the EPA trumpeted the findings of the Southwest Research Institute earlier this year,  it didn’t mention the founder’s quest for Yeti or his ties to the CIA.

In July, EPA Region VII announced that the prestigious Southwest Research Institute in San Antonio had analyzed soil samples from West Lake Landfill and found that heating  dirt from the radioactively-contaminated dump in a laboratory setting had not increased dangerous radon levels.

Community activists were not assured by the pronouncement, however. They are still demanding an expedited cleanup of the long neglected site in North St. Louis County and continue to question attempts by the press and the EPA to downplay the problem posed by the nuclear weapons waste.

For its part, the EPA  has cast the debate as one that pits the dismissive opinions of its so-called scientific experts against the public’s perception of risk, which they contend is based on rumors and misinformation.

A good argument could be made, however, that rumors and misinformation is the stuff from which the Southwest Research Institute spawned.

The late Tom Slick Jr.,  founder of the Southwest Research Institute, believed in the existence of the Yeti, aka, the abominable snowman; and he spent a considerable amount of time and money attempting to prove the creature was a reality.

You read correctly: One of the top government-approved research facilities in the country, with a revenue exceeding $500 million in 2015, was established by a bonafide cryptozoologist, a true believer, who spent years chasing after the abominable snowman, the subject of derision among generations of serious scientists who scoff at the idea and label it nothing more than pure science fiction.

It’s enough to give pause, when the EPA asserts that its contractors hold a monopoly on  irrefutable scientific facts.

When he wasn’t chasing Bigfoot or giant Alpine salamanders, Slick operated a CIA air cargo company in his spare time, while managing his oil and cattle empire.

Apparently, the same curiosity and fervid imagination that fueled his search for monsters drove him to start up the research center in 1947. He subsequently bankrolled two expeditions to the Himalayan Mountains of Tibet in search of the legendary, hirsute biped.

Slick also went on a trek to the Canadian Northwest in search of the Yeti’s North American cousin, Bigfoot. Before either of these quests, Slick, while still in college at Yale,  journeyed to Scotland to investigate the legendary Loch Ness monster.

Slick inherited his wealth from his father, a wildcatter who struck black gold during the Oklahoma oil rush of the 1920s.

In the 1950s, Slick and his brother operated Slick Airways, a CIA air cargo company that operated in Asia before the notorious Air America of the Vietnam era.

There is speculation that Slick’s Tibetan expeditions were covers for covert CIA operations to gather intelligence on Chinese hegemony in the region.

Slick, an avid pilot, died when his small plane crashed on a return flight from a Canadian hunting trip. He was 46 years old.

The EPA’s recent tests of West Lake nuke waste are not unprecendted. Sixty-five years ago the AEC published a recipe by Mallinckrodt Chemical Works  on “roasting”  pitchblende.

“If you can’t stand the heat, get out of the kitchen” is President Harry S Truman’s  most noted quip. But Truman is remembered more for actions than words.

He ordered the atomic bomb attacks on Japan that ended World War II. Much of the uranium used in those bombs came from African pitchblende ore and was processed by Mallinckrodt Chemical Works of St. Louis. The classified work continued during the Cold War nuclear arms race that followed. As a result, radioactive waste was haphazardly strewn at sites across the region for 20 years.

Embers of that fateful era are still burning today in North St. Louis County, where leftovers from the Manhattan Project remain a topic of heated discussions.

“Heat” is exactly what the Southwest Research Institute in San Antonio applied in its laboratory experiments earlier this year. The purpose of research was to determine whether uranium waste from the makings of the first atomic bombs — dumped decades ago at the West Lake Landfill — threatens to release harmful radon gas if exposed to increased temperatures.

Spurred by public concern, the EPA commissioned the study to see what would occur if the underground fire raging at the adjacent Bridgeton Landfill met the radioactively-contaminated materials (RIM) buried at the West Lake Superfund site. The question has been smoldering since December 2010, when landfill owner Republic Services reported the hellish conditions.

The good news, according to the EPA, is that the tests confirmed that baking RIM does not increase radon gas emissions and in some instances decreases them. Community activists have hotly contested those findings, questioning whether the simulated laboratory conditions are comparable to the real fire in the hole.

The latest assurances appear to be another attempt to stem the firestorm of public distrust that surrounds the topic.  Meanwhile, the subterranean smoldering event, as the EPA prefers to call it, continues to burn closer to the RIM.

As the sparks from this drama inevitably create more smoke than light, it should be kept in mind that the flouted tests are not the first to measure the effects of heat on pitchblende. That distinction goes to the Atomic Energy Commission, which published a Mallinckrodt report on the subject in December 1950.

The title of the 65-year-old tract, “The Roasting of Pitchblende Ore,” seems more applicable to a macabre cookbook than a scientific treatise. It also conjures up a combination of Arthurian alchemy and biblical fire and brimstone.

Brimstone is the ancient word for sulfur.

Up to ten percent of the content of the pitchblende ore was comprised of sulfur, according to the Mallinckrodt study. In the 20th Century, the Mallinckrodt scientists were not concerned about the health impact of the sulfur or radioactive materials for that matter. Instead, they theorized that removing the sulfur by cooking the pitchblende would save the company money and increase profits. 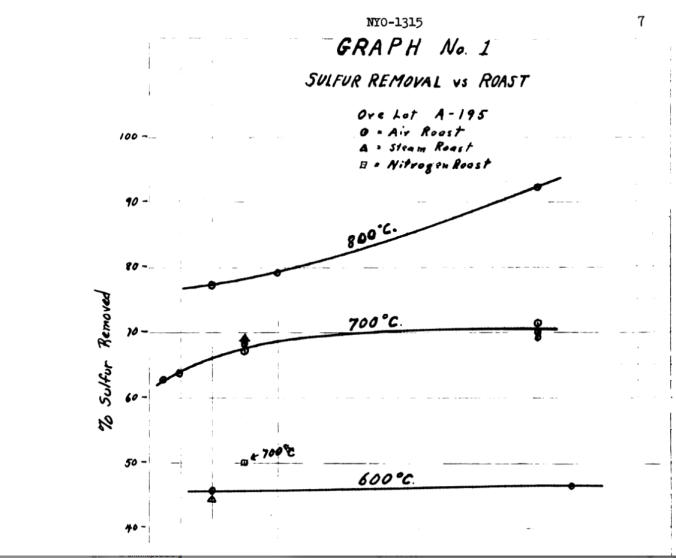