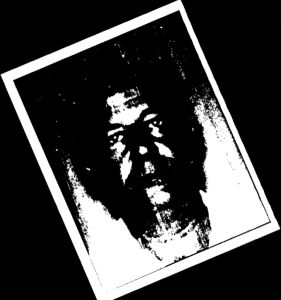 There are those who sometimes jokingly refer to the EPA Superfund site in Bridgeton as the “Tony Soprano Landfill,” but it may be no laughing matter.

By his own admission, the late president of the West Lake Quarry Co., had dealings with reputed St. Louis underworld figure Anthony “Nino” Parrino for 20 years.

Moreover, FBI records recently released under the Freedom of Information Act indicate Parrino fell under scrutiny of a federal labor-racketeering probe in part due to his ties to St. Louis Teamsters Local 682. 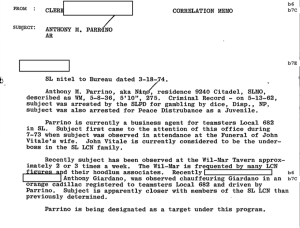 Parrino became a federal law enforcement  target in July 1973, according to the FBI records. He first appeared on the bureau’s radar ostensibly because he attended the funeral of  the late John Vitale’s wife. Vitale was then second in command of the mafia here.

Coincidentally, B&K Construction also began dumping radioactive waste at West Lake  Landfill in July 1973. No evidence has been unearthed since then showing a direct connection between the two events.

But that may be because the federal labor-racketeering probe here hit a wall.

Parrino remained a 682 official until 1991. By then the Teamsters International Union had been placed under the custody of the U.S. Department of Justice due to alleged corruption inside the leadership of the union.

Citing his ties to organized crime, the feds finally removed Parrino from his union post along with Local 682 boss Robert Sansone.

St. Louis politicians and business leaders opposed the federal action and stood firmly behind the two.  Among those publicly defending Parrino and Sansone was William J. McCullough, the retired president of West Lake Quarry and Materials Co. and West Lake Ready Mix Co.

In a letter to the editor published in the St. Louis Post-Dispatch, McCullough lauded both labor officials’ professional ethics. McCullough’s letter indicates that Parrino was involved in representing union interests with the quarry owners from 1965 to 1985.

It’s impossible to know what may have happened had the federal anti-crime task force not been shut down.

McCullough’s  Oct. 10, 1991 letter to the St. Louis Post-Dispatch is reprinted in full below:

The recent coverage of Bob Sansone, the president of Teamsters Local 682 and now vice presidential candidate of the international, prompts writing this letter.

For a period of 20 years until 1985, I was a senior officer and finally president of the West Lake Quarry and Material Co. and the West Lake Ready Mix Co. Labor relations was a key part of my job. We worked with labor leaders from 12 different unions, and dealings with Sansone and Anthony Parrino were always done in a professional manner.

Both Sansone or Parrino entered any grievance with an open mind and pursued it with diligence for their members. When the employee was right, both men worked for the maximum benefit for the employee; when the company was right, they pursued a course in the best interests of the employee, yet were fair to the company.

Never were improper pressure or threats put forth by either person. Both were well versed in labor law.

I do not know what Parrino’s alleged ties were or are to any other organization. I do know that I trusted him completely to deal fairly with us for the good of both the employees and the company.