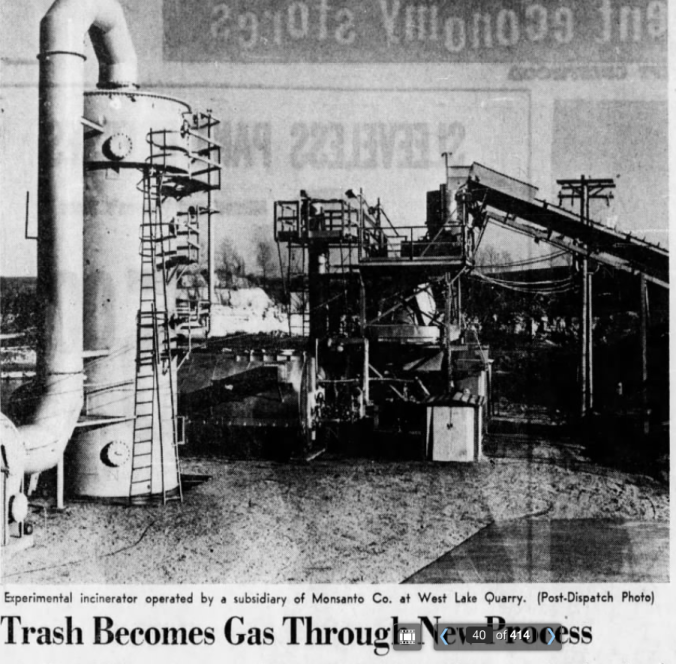 When the West Lake Landfill in Bridgeton, Mo. is mentioned nowadays, it is most often associated with radioactive waste produced by Mallinckrodt Chemical of St. Louis, and the underground fire raging nearby. But records uncovered by STL Reporter indicate another locally-based chemical behemoth had earlier burning desires for the West Lake property.

Bridgeton City Council minutes from May 7, 1969 state that representatives of the Monsanto Chemical Co. asked the council to approve an application for a permit to run a pilot plant at the West Lake Quarry. The quarry and the landfill were then two parts of the same operation. 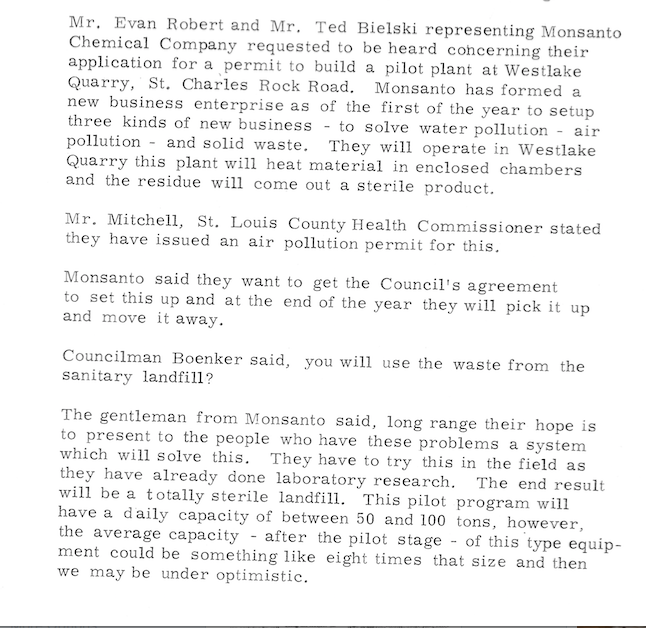 Monsanto spokesmen Evan Robert and Ted Bielski told the council that Monsanto had formed a new business enterprise earlier that year to address an array of pollution problems. The plant would “heat material in enclosed chambers and the residue will come out a sterile product,” according to the council minutes.

At the same meeting, the St. Louis County Health Commissioner told council members that the county had already issued an air pollution permit for the pilot plant, which was expected to operate for the remainder of 1969.

The minutes lack details of the proposed plant, but appear to outline plans for Monsanto to operate an incinerator at the location.

Prior to presenting the proposal to the council, Monsanto would have almost certainly have negotiated an agreement with West Lake’s owners. West Lake’s operation already included a cement kiln, which could also have served as a possible waste incinerator.

Councilman Edward Boenker, the owner of an adjacent farm, asked whether Monsanto intended to use waste from the landfill. The minutes do not indicate whether the company representatives responded to the question.

But ten months later, it’s clear the incinerator was up and running at the site. A St. Louis Post-Dispatch story on March 15, 1970 includes a photograph of the incinerator and says that trash being hauled to the landfill was being burned in the incinerator.

A Monsanto subsidiary — Enviro-Chem — used an experimental process referred to as “pyrolysis” to burn the waste and then capture and burn the resulting gases.

“All that is left after the burning of the trash, spokesmen for Enviro-Chem say, is dirt, rock or glass that were present in the original composition. These by-products can be used, they say, for land fill,” the Post-Dispatch reported. The story said the company was considering using the gas emissions from the process to generate energy.

“D.L. Chapman, director of the solid pollution control department of Enviro-Chem, said that a decision would be made by this year (1970) whether to try to market the company’s process,” the news story said. 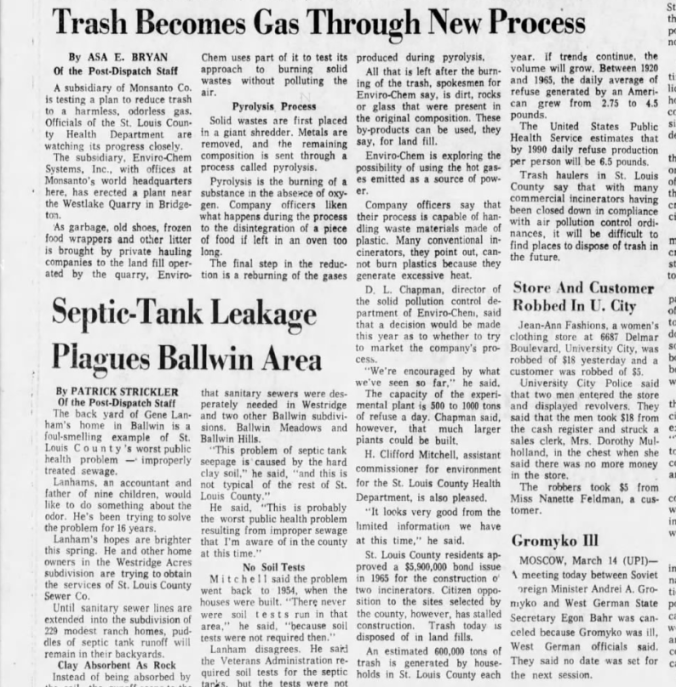 At the Bridgeton City Council meeting in 1969, the Monsanto representatives said that “the end result will be a totally sterile landfill,” according to the council minutes. They estimated that the pilot plant would treat between 50 and 100 tons daily. Nothing in the document says specifically what kinds of wastes would be treated. But the Monsanto representatives did describe the end product as “sterile,” which suggests that the untreated waste was harmful.

In the late 1960s, Monsanto produced a component of Agent Orange, a defoliant used by the U.S. military during the Vietnam war. Dioxin, is a toxic waste byproduct of Agent Orange. The EPA later discovered that dioxin contaminated the town of Times Beach, Mo. and dozens of other sites in Eastern Missouri and incinerated it. The clean-up of those sites took decades to complete.

One thought on “What Did Monsanto Burn at West Lake?”