At the turn of this century, the state of Illinois complained that the U.S. Army Corps of Engineers had failed to adequately clean up a radioactively-contaminated site in an African American neighborhood in Madison County. Sixteen years later, the problem remains unresolved.

But the thousands of daily commuters who use this heavily traveled highway between St. Louis and Alton, Ill. can easily whiz by the former Dow Chemical foundry that straddles the towns of Venice and Madison without even noticing it.

For decades, the federal government has been turning a blind eye to the site, too, despite a plea from the state of Illinois to take a closer look at the radioactive waste known to contaminate the area inside and outside of the plant. The contamination is the byproduct of nuclear weapons production from the Manhattan Project and the Cold War.

In 2000,  Thomas W. Ortciger, the then-director of the Illinois Department of Nuclear Safety made clear to the U.S. Army Corps of Engineers that the clean up of the site was insufficient to protect the human health of workers or residents. The Corps dismissed his appeals.

“… [T]here remains a lack of commitment by the Corps to remediate all contaminated areas at the site,” said Ortciger. His comment is contained in a letter to the Corps dated March 16, 2000. “The State of Illinois’ position on this matter is clearly articulated in the Department’s comments, and we urge you to reconsider them when finalizing your Record of Decision.”

In comments made at the sole public meeting held prior to Corps decision, which was held on Feb. 25, 2000, the Illinois Department of Nuclear Safety informed that the Corps that its clean up plan was insufficient. “The Corps has inadequately assessed the dose to the first group (workers) and has entirely ignored the second critical group (residents.)

The residents are still being ignored, and many of them have died in the intervening years. 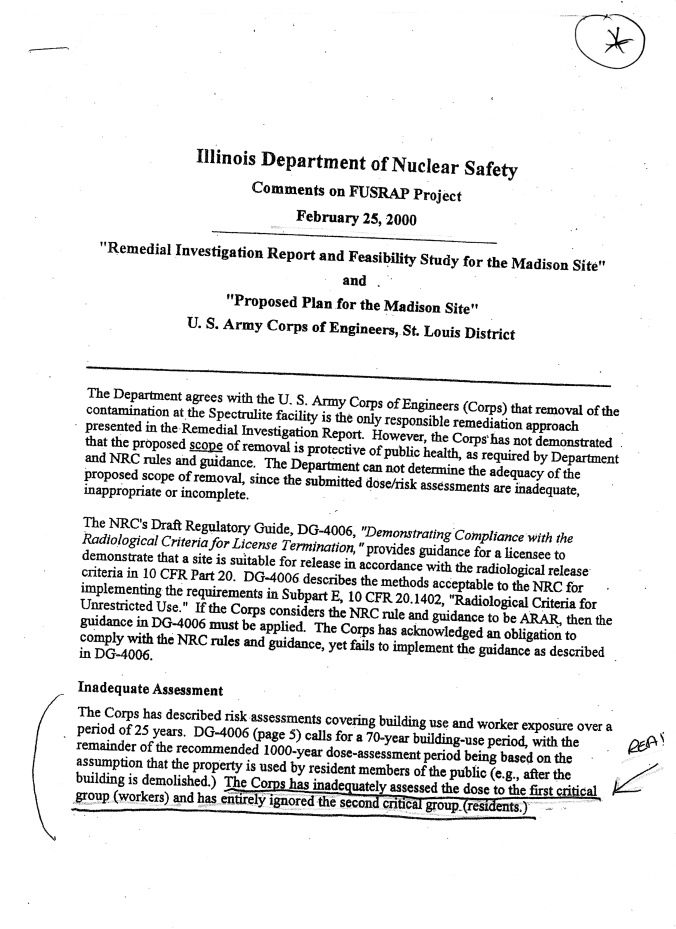 The history of radioactive contamination at the foundry dates back to 1957, when Dow began processing uranium for fuel rods under a subcontract with St. Louis-based Mallinckdrodt Chemical Co., which was working for the U.S. Atomic Energy Commission. The plant was one of hundreds of low-priority radioactive sites nationwide identified by the federal government’s Formerly Utilized Sites Remedial Action Program in the 1990s. The subsequent government-mandated clean-up, which was overseen by the U.S. Army Corps of Engineers in 2000, focused mainly on uranium contamination inside facility and did not include additional monitoring or remediation at the adjacent 40-acre site.

The thorium waste was the byproduct of another facet of the foundry’s operations — production of lightweight alloys used for military and aerospace applications. Between 1960 and 1973 Dow dumped millions of pounds of sludge containing 4 to 8 percent thorium behind the plant on the adjacent property. After Conalco took over the operation, the dumping continued for years, including monthly shipments of thorium waste produced at Dow facilities in Bay City and Midland, Mich.